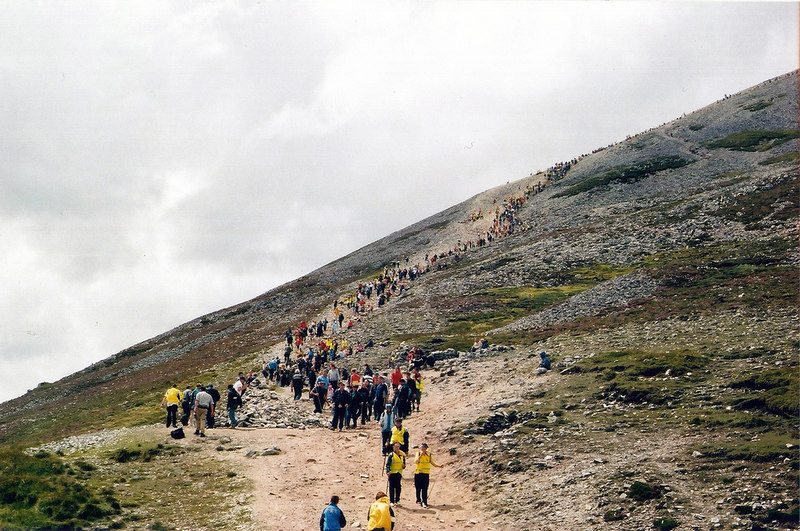 It is the time of Lughnasadh, (or Lúnasa), the Irish Harvest Festival that occurs around the end of July and the beginning of August. In modern Ireland, it has undergone a revival and is often celebrated over the August bank holiday weekend, the first full weekend in August each year. It follows close on Reek Sunday, the last Sunday in July, where people climb Croagh Patrick, a mountain in Mayo also known as the Reek (1). Head of Crom Dubh. Stolen from Cloghane Church, at the foot of Mt Brandon in August 1993.

St. Patrick is reputed to have climbed the mountain and spent 40 days fasting, in retreat at the top.

While the festival is named for Lugh, a member of the Tuatha de Danann, there is evidence that Crom Cruach or Crom Dubh, an older deity, may have been the original object of worship at the harvest time.  He is an ambiguous god. Associated with harvest and fertility, he is also associated with death. The Dinnseanchas (the lore of place-names) describes how Crom Cruaich’s golden idol was set on Magh Slécht, in Co. Cavan, surrounded by 12 stone statues. Tigernmas, High King of Ireland and the majority of his troops mysteriously died there on the night of Samhain, while worshipping Crom Cruaich.

Crom Dubh is associated with high places. In Co. Mayo, he is associated with the Reek/Croagh Patrick, which was also known as Cruachan Aille or Aigle, the Eagle’s peak. St. Patrick is credited with banishing Crom Dubh to Dun Briste (literally Broken Fort), off Downpatrick Head, near Ballycastle, Co. Mayo. The last Sunday in July is known locally as Domhnach Crom Dubh (Crom Dubh Sunday). Crom Dubh is also associated with Mount Brandon on the Dingle peninsula. There Crom Dubh, as a pagan chieftain, was converted to Christianity by St. Brendan. Crom Dubh Sunday is given as a name for the Lughnasa festival in the area. On that day, local people would climb Mount Brandon from the east to celebrate the harvest.

The last Sunday of July is known by a variety of terms in Ireland: Garland Sunday, Domhnach Crom Dubh (Sunday Black Crom)

Domnach na bhFraochóg (Bilberry Sunday) as well as Bilberry Sunday or Fraughan Sunday, all testament to the importance of this time of year. The gathering and eating of first fruits, especially berries was a prominent activity. Indeed, the gathering and eating bilberries seems to have been especially important. Perhaps this was because they are wild fruits, a gift of nature and not something one had to sow and nurture. Bilberries are known by different names around Ireland: fraughan, frachóg, whorts, hurts or heatherberries. They grow in mountainous areas and are similar to blueberries.

Handfasting was also done at this time. To handfast was to enter a marriage for a year and a day. The marriage contract could then be finished or renewed at the end of the year and a day.

Lughnasa, like so many things in Ireland, has a long history and a number of rich associations. The stories of Crom Dubh, Lugh and St. Patrick are testaments to this history. Lugh may have taken over from Crom Dubh as religion changed or new peoples arrived, only to eventually be displaced by Christian saints like Patrick and Brendan.

Lugh is a complex character. Born of 2 races, both Formorian and Tuatha de Danann, he was fostered by Mananann Mac Lir, the sea god and Tailltu, a Fir Bolg queen with connections to land and agriculture. He survived his Formorian Grandfather, Balor’s attempt to kill him as a baby and later killed Balor at the battle of Moytura. Scholars used to describe him as a Solar God but that description is no longer regarded as fully accurate. Lugh seems to have connections to land, sea, underworld and overworld, to high places.

One of my favorite stories of Lugh is the one where he arrives at the gates of Tara. It seems a particuarly apt tale to tell in this harvest time. Tara is the sacred centre in Irish mythology, associated with High Kings and in this tale, the home of the Tuatha de Danann. As a young man, Lugh arrives at the gates of Tara and asks to be admitted. The Doorkeeper asks why he should admit the young man, intimating that only the most gifted of people can enter. Lugh proceeds to name his gifts. “I am a master Smith,” he announces only to be told that Tara already has a master smith. “I am a harper,” he adds, only to be told that again, Tara already has a master of that craft. Lugh proceeds to name his many gifts, musician, singer, carpenter and so on. Each time, the doorkeeper tells him that Tara already has such a master in residence and Lugh cannot be admitted. Finally Lugh agrees with the doorkeeper that Tara may indeed have a master of each craft but asks if they have any one person in Tara who is master of all those crafts? Of course, there isn’t and Lugh, after proving his skills, is admitted. Thereafter, he is known as Lugh Il-Dánach, the Many Talented.

What can we take for ourselves from this time of year? In the Irish/Celtic cycle, harvest and pilgrimage are both active energies at the end of July and beginning of August. Handfasting, a tradition of marriage that lasted for a year and a day was also practiced during this festival time. Harvest, gathering, first fruits, handfasting, pilgrimage thus are all important elements of this time in the Irish traditions. For us today, engaging a little with these traditions can open the doorway to insight and reflection at this festival.

1. A climb to the summit of Croagh Patrick, “The Reek,” also took place near St. Patricks’s Day (March 17), until in 1133AD, a number of climbers were killed on the summit in a bad storm. It is possible, given the links to Crom Cruaich/Dubh,  that there was always a tradition of climbing the Reek near the harvest time and that the practice of also climbing  at Easter or near St. Patrick’s Day fell out of favor due to  seasonal difficulties. I have also read that Crom Dubh, in Scotland is associated with Easter so there is some more research to do on the timing of these traditions.