Vampires and Bloodsuckers: The Transformation of the Vampire in Literature. 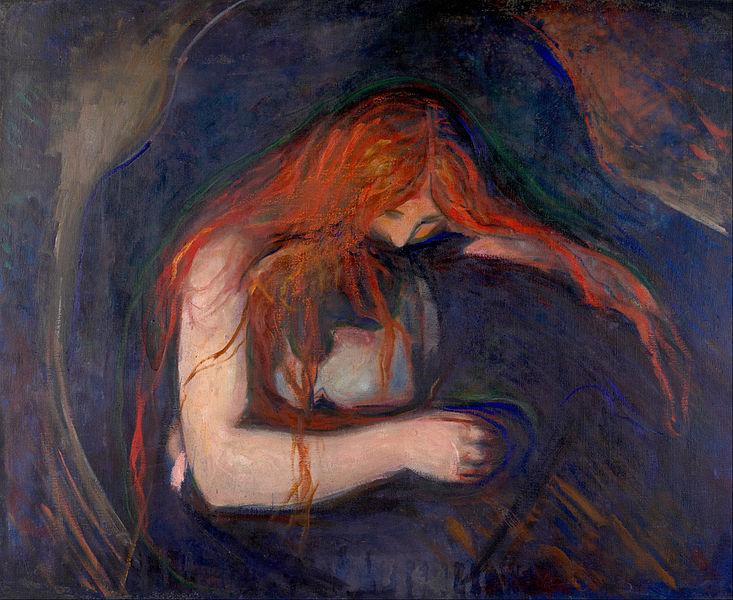 One stormy, dark night in 1816, on the shores of Lake Geneva, Lord Byron suggested to a few of his friends that they each write a supernatural tale. Among the guests were Percy Bysshe Shelley and his future wife, Mary Wollstonecraft Godwin (later Shelley), and Dr. John William Polidori. Out of this evening’s entertainment came one famous work, Mary Shelley’s Frankenstein, and one almost forgotten work, Dr. Polidori’s The Vampyre. Yet, it is from this novel, published in 1819, that all famous vampires that follow draw their lineage. From Bram Stoker’s Dracula (1897) to Anne Rice’s Lestat, Polidori’s Lord Ruthven serves as the model for vampiric excellence.
Vampires had been around for centuries before Polidori. Blood sucking, flesh-eating and energy draining creatures populate the myths of world, from India to the Americas. In Babylon, the Seven Spirits were “ … a consortium of blood-quaffing demon gods…” (Frost 5). Many were female, not male. Lillitu made her appearance in Babylon and was adopted as Lillith in Hebrew mythology (Summers 198). Her appearance as succubus remained a common feature in European lore for centuries (200). In the Americas, vampiric creatures populated the Aztec world and in recent years the Chupacabra has feasted in places as far apart as Puerto Rico and Russia. Kali and the Rakshasas have struck fear into the hearts of the people of India for centuries and the obayifu has drank the blood of Ashanti children for equally as long (Summers 228).
None of these, of course, match the image of vampire as we popularly conceive it. Indeed, in European folklore, vampires were, most often, recently dead peasants, bloated, smelly, ugly revenants, who preyed on their own relations (Stevenson 6) and turned up in grave linens, leaking decomposing bodily fluids. The modern concept of the arrogant, elegant, predatory, male aristocrat who has become the one true vampire was in fact invented by Polidori (1819) and probably based on Byron himself. This motif was expanded on by Stoker (1897). These 19th century writers are responsible for vampires as we know and mostly, admire them. Polidori’s Vampyre remained an obscure book but Stoker’s Dracula has never been out of print since it was first published in 1897. Stoker made the mold for the modern vampire.
This literature changed the face of vampires and essentially created a new being. While Dracula retains the ability to terrify and horrify, he also is an elegant and sexually appealing creature. There are no grave cloths or smells of decay. Dracula also is no longer bound by place, being able to move from country to country, place to place, as long as he brings his native soil with him. Gone are the restrictions of location and this new freedom, combined with freedom from death adds a new lethal charm and earnest danger to the character. 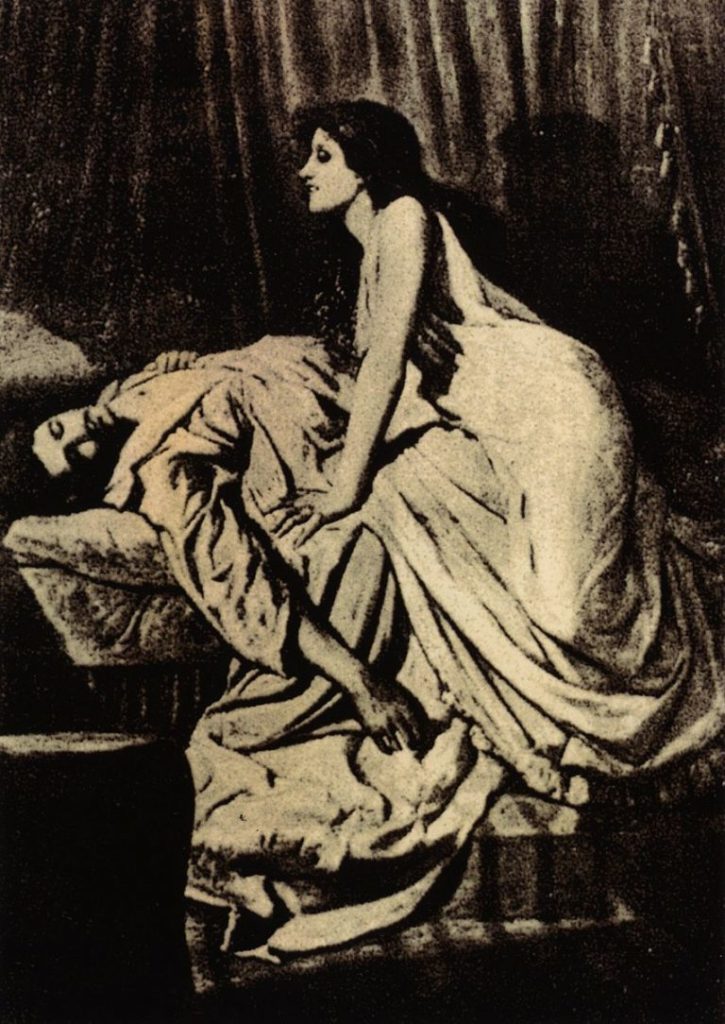 Le Vampire by Burne-Jones, 1897. In art, the female vampire seems to have remained a popular subject.

Vampires seem to carry the fears most relevant in society at the time of writing. The period Stoker wrote in, was one of tremendous contradiction – incredible leaps forward in science and technology were matched by depths of poverty, illness and dehumanization in factory life. Appearing at the end of the colonial era, Count Dracula posed many threats to Victorian social, moral and political values. He represented the stranger, the foreigner who invades England and threatens its superiority. He represented the fear of regression, a reversal of evolution, a return to our more primal animal state, just as we thought we had evolved. He caused doubt in the scientific, evolutionary attitude of the Western men who pursue him. As Van Helsing says “Do you not think that there are things which you cannot understand, and yet which are;…it is the fault of our science that it wants to explain all; and if it explain not, then it says there is nothing to explain,” (Stoker 304). Worst of all, Dracula changes virtuous women into voluptuous beings with ravenous sexual appetites. “… the bloodstained voluptuous mouth…the whole carnal and unspiritual appearance, seeming like a devilish mockery of Lucy’s sweet purity” (Stoker 341).

Blood is the central motif in Stoker’s book. It represents deflowering, sex, food, semen and even can be seen as mirroring the blood of Christ. The link between feeding and sex is often an intimate one and the same word is commonly used for both activities in tribal cultures (Levi-Strauss 269). The blood stains on a nightdress and the near descriptions of oral sex (Stoker 448), the red lips (Stoker 58) and languid sighs of the women all point to the sexual undertones. Blood is the giver of eternal life in the vampire world and in the Christian world. “And you, my best beloved one, are now to me flesh of my flesh, blood of my blood, kin of my kin…” (Stoker 457). The contrast between Christ’s blood and vampiric feeding suggests the age-old struggle between good and evil. In Stoker’s work, the vampire can be seen as the embodiment of evil that can only be destroyed by reasserting the beliefs of traditional Christianity in the increasingly skeptical and secular age of the late 19th century.
The portrayal of the vampire as an aristocrat who is immortal as long as he drinks blood, links together the concepts of the well-to-do, blue-blooded nobility and the desire for long life. The vampire has been changed from one who is simply feared to one who is both desired and feared. Aristocratic without necessarily being noble, immortal and hence endlessly sexual, the vampire is an ambiguous creature, awakening the desires that society represses.
Anne Rice’s vampires develop that ambiguity even further. They also express the fears of modern man but these fears have changed. The stories retain a decent fear of death, but they also explore other more abstract issues. Her vampires, especially Lestat and Louis, are to varying degrees, self-reflective and philosophical. They ponder their own existence, their own nature and their alienation from each other and humankind. These vampires have consciences, Louis more so than Lestat, and even go as far as trying not to drink human blood. Louis’ first-person confession of his struggle against the evils of his preternatural curse in Interview with the Vampire (2002) transformed the vampire from a hideous predator into a highly sympathetic, seductive, and all-too-human figure. They accept their dark gift with mixed feelings. Vampires miss the companionship of humans, fearing the power of their blood lust and yet, revel in that lust. And when vampires create another like them, a fledgling, it needs care and teaching. A fledgling vampire is vulnerable and needy, unlike the newly created vampires of Stoker. These vampires are far more human than Count Dracula ever was. They are still suave, smooth, sexual and even bisexual, and suffer none of our cultures perceived homophobic tendencies. They are the new male, sensitive, struggling yet retaining that edge of danger: immortal and strong.
The transformation of vampires continues in the characters of Edward Cullen in Twilight (2006) and in the vampires in A Touch of Dead (2009) by Charlaine Harris. The Twilight (2006) Cullens, a vampire family, no longer drink human blood, except when there is no other choice. They befriend humans and protect them. They even are capable of loving humans as the relationship between Bella and Edward shows. In this series, it is Bella who desires to be made into a vampire and Edward who refuses her requests. She is the instigator of sexual involvement and Edward, the vampire, is too moral to agree to it. It is a classic tale of unconsummated love but also a reversal of the usual male/female roles and of the vampiric character. Yet it is he who holds the power of transformation and it is Bella who waits determinedly.
The novel, A Touch of Dead (2009) also offers a new twist. Now vampires have access to “trublood”, a fake blood of Japanese invention, that they can purchase at the local supermarket. They are no longer of any threat to humans and can live quite openly among them. These vampires remain highly sexual and suffer none of the moral angst that Edward does. In fact, vampires, who by nature cannot reproduce, are sought after, tireless lovers. This is safe sex at its best, with the added joy that a nip from a vampire improves your skin and makes you look younger and more beautiful.
These new vampires are a far cry from Dracula and an even further cry from the stinky revenants of European folklore. Suddenly the vampire isn’t inherently evil. He is like us, struggling to survive, to make good decisions, to love and be loved. He is no longer the polar opposite of good. Instead he embodies the internal struggle of good versus evil. Like us, the vampire needs to face the inner darkness. This newfound struggle makes the vampire a sympathetic character, elevating the archetype from one-dimensional villain to multi- dimensional hero. The vampire seeks to understand the darker side of his nature. Like us, the vampire has become aware of inner dynamics and psychological processes.
Is this a good thing? Perhaps. Maybe it is a sign that we have begun to accept our own complexities and no longer are satisfied a simple understanding of apparent evil. Maybe it is a sign we have begun to hold our projections closer, that we understand ourselves better. But I wonder at the loss of the female vampires. Modern vampires remain, for the main part male. And although female vampires still exist in the halls of fiction, as Rice shows in The Queen of the Damned, the suave aristocrat holds the larger and more moral part. It looks like we still have work to do on integrating the dark feminine.